I’ll try to make this short….I need your help! 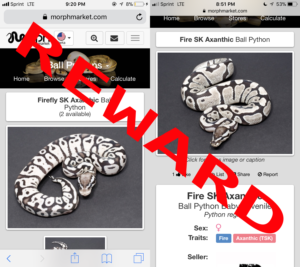 I have 2 animals that were sold in November of 2017 that are currently part of a fraud investigation and I need your help finding them.

The exact animals are pictured above in the “Reward” photo; a Firefly SK Axanthic and a Fire SK Axanthic, both females.

I was contacted through MorphMarket and the animals were purchased with a credit card and shipped to a residential address in Chicago. Since that point in time a dispute has been filed on the charges and the funds taken while a full investigation is underway by the credit card company.  Several pics of these details are at the bottom of this blog post.

This same “buyer” purchased from another well known breeder in the industry through MorphMarket as well but shipped to a different residential address in the Chicago area.

If you or anyone you know has or sees these animals being offered for sale please contact me directly via email or cell (john@jdconstriction.com 319-423-9987).

Anyone who is able to provide information leading to return of the animals or the closure of the dispute in our favor along with information which can be used to press charges I will gladly give a $500 credit good towards any purchase.

Thank you in advance for your help! 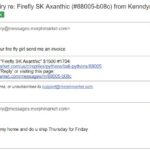 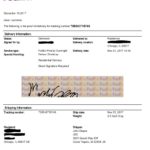 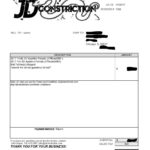 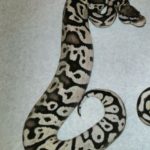 About 1-2 times per week I get emails asking about purchasing a Stormtrooper, pricing, and when/if some will be available for sale.  (Which is totally awesome!) So to help answer some questions I decided the best place to put that info would be right here on my blog 😀

At the NARBC Spring Tinley that season we brought her along and had her priced for the first time while on our table (see picture).  While we have had several 4 digit and 5 digit offers she has stayed here and has since been removed from being listed for sale entirely. 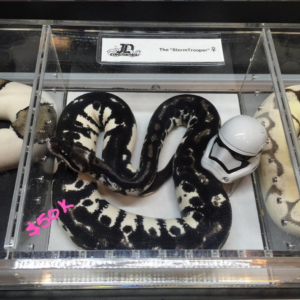 For hobbyists that pricetag is quite expensive, but as expected for a one of a kind!  I am hoping to produce more in the coming years but they will likely be similarly priced until there is enough of them to transition over into a hobbyist market and would be more affordable at that time.

As for when that will be?  Honestly it’s anybody’s best guess.  With the pairing that produced her being a bit of a mystery (ie 2 males were introduced to the dam) and the odds having to stack up again in our favor genetically to hatch one, it will be a few seasons before we would likely hatch another.  AND THEN likely a couple more seasons after that until we offer any for sale to first build a breeding group of our own of them.  In other words a guess would be that there may be some for sale in 3-5 years from now but they would be at extremely high prices for most enthusiasts.

The great news tho is that the Stormtrooper herself has quit changing color, is feeding and growing well, and is on track to join our breedings during the 2017/2018 season!  With the addition of her breeding as well as her dam we will have a lot better odds of producing more and figuring out her genetic mystery.

Until the day we do hatch more STs tho we have several great animals that are very unique and fairly similar being we have focused so heavily on the Axanthic gene!  Feel free to check out our full masterlist located here:
www.jdconstriction.com/masterlist

Or for pics of some of the animals listed above see our store at MorphMarket!

Thank you and hope this helps!!!