I posted pics of this beauty as she started to change colors on my Facebook Page and the most recent pic I posted went somewhat viral! (atleast for my humble page)  Resulting in over 300k views and 3k+ shares in only a few days.  WOW!

Since I have yet to figure out the genetics of this beauty a few folks have playfully called her a “Stormtrooper” which I think is super fitting as I’m a huge fan!  So until the genes are figured out I think that’s a great pet name for her!

The video tells the tale but here is also the pic that got several folks talking!

Thanks for watching, enjoy, and I’ll def keep posting updates! 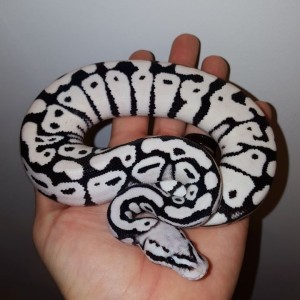 Things have really been awesome these past several weeks as far as hatching.  I have REALLY had a great season so far and with every new clutch hatching it seems I’m totally lucking out and hitting on some of the exact things I’m looking for!  On top of being EXTREMELY lucky!

Some of the awesome highlights as of late 🙂

This little girl just crawled out today in fact!  I’m super excited to have my Leopard het SK Axanthic male do a little fathering of some clutches.  This would be the 3rd visual Axanthic combo animal with Leopard I’ve hatched so far this year with atleast 1 more clutch with possible Leopard Axanthic stuff in it! 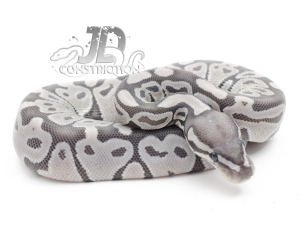 The other fun animal that hatched out and was a HUGE surprise this season was also VERY rare!  I purchased some Vanilla het SK Axanthics a few years back which were also possible het for ghost.  Further from a great friend I got a female double het SK Axanthic Ghost I ran that Vanilla het Axanthic possible het Ghost to and VOILA!  I ended up not only proving my Vanilla het for both but ALSO luckily producing this awesome True Ghost!  Very excited to see her color up! 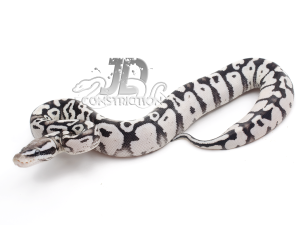 Lastly, but certainly not least, I had bred my Firefly Axanthic to a couple of big Yellowbelly het Axanthic girls in high hopes of hitting on this combo!  A Firefly Yellowbelly Axanthic!  Not “very” much different that the Firefly Axanthic to most but definitely more aberrant pattern and just overall a wickedly patterned and colored animal!  I have high hopes for this male in the next few seasons as I think those genes mixed in with other pattern morphs will truly be outstanding!  Imagine Firebee Yellowbelly Axanthics!!!

So far indeed has been an awesome season and I really look forward to what other animals pop out in the coming weeks!  We are over 1/2 way but I still expect some really neat new combos for us to be hatching!  Further show season is just around the corner and I can’t WAIT to start seeing folks and talking more about Axanthics in person!  Hope to see you out there!

I’m super pumped to start seeing some of the wicked Axanthic combos I had hoped for this season start showing up! We are just getting into our hatching season and already I hit on not 1 but 2 Firebee Axanthics! From breeding a Firefly Axanthic to a Spider het Axanthic no less which is a 1 in 16 chance! 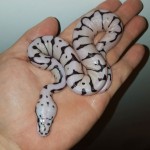 I am excited to see how they will color up! The goal being of course to have as black and white a spider as an adult as possible while retaining as much contrast as possible. Bee

Axanthics tend to turn a light “grey” as they age and while the Killerbee Axanthics have a great dominant coloration as adults the “super pastel” causes alot of fading of the blacks making for less contrast. Contrast is where it’s at with Axanthics so the Firebee should be the first step towards making that white and black combination as an adult!

On top of the Firebee Axanthics we have been super lucky to also hatch some very nice Axanthic combos in the process. Not just awesome to do comparison photos but honestly great looking examples! 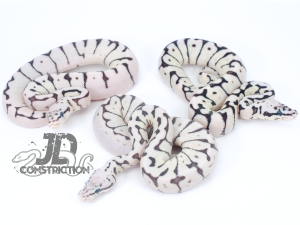 Overall a VERY excited season with a new record number of clutches for us and some great pairings!  Keep an eye out for more fun stuff as we start seeing more things out of the eggs!

It’s that time of year again when you’ve been pairing snakes for what seems like years (but has maybe only been months) and you are wondering what the heck is going on!

As I’ve gotten more and more breeder females over the years and have seen more and more female behavior it has gotten to be a much easier task to know what’s going on with my girls.

One other variable that has helped me solidify my suspicions and helped me understand better what’s going on has been an ultrasound.  Knowing what is going on isn’t always “needed” to be successful at producing babies, in fact it sometimes hurts your chances if you are overly curious and an over palpater!  But all in all it’s definitely nice to atleast know who is going to produce eggs for you and what the signs are a lady is going to lay.

One of the more helpful graphics of the female ball python cycle I admittedly stole off the interwebs, but only because it really is a great resource.

This picture of the Ball Python Female Reproductive Cycle is great for a number of reasons!  One big take away is that it shows you that the “breeding” season for a female can last anywhere from 4 months to 8 months before ovulation!  That’s a LONG time!  However it lacks some of the details leading up to the big “OV” that might be more helpful.

I’ll caveat the following information as being “what’s worked for me” and “what I’ve seen”.  As with anything your personal experience and what works for you may vary. 🙂

Even after having an ultrasound, trying palpating, and every other trick in the book I came back to a short list of what to look for in a developing female.  I put together this graphic of the timeline I look for in a female to know whether or not she’s going to lay.  And to be honest, unless I’m really unsure of what a female is doing and she isn’t moving along like I had been thinking I don’t use an ultrasound or palpate anymore at all.

The list of what to look for can kind of be summed up into just a few key things.
1.) Feeding Response (lack there of)
2.) Glowing
3.) Cool Seeking
4.) Start of a “Build”

For me that last one is the most important indicator that a female is going to go for me.  The first 3 give me an inkling that things are headed in the right direction.  The female has been breeding well, was feeding aggressively at one point but has since shut off, is glowing and looks fantastic, and lastly is typically using the cooler end of the cage.

Females that transitioned into that state and are in that stage I pay very close attention to, looking for one particular thing to let me know I can quit breeding them and can expect eggs…..a “build”! 🙂

A build isn’t the easiest thing to spot when a female is just laying there.  It’s actually best if you simply get the female out of the cage and drape her vertically to see if there is any signs of a “ponch” in the lower 1/3 of her body.  Again this is a female who has transitioned off of food so it’s not a rat she ate the other day, this is an “out of nowhere” slight bulge. 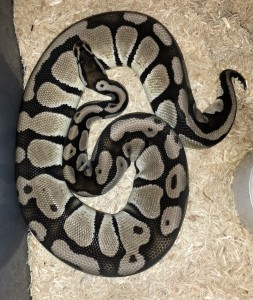 For instance this female looks fairly “normal” and doesn’t appear to be building/ovulating or anything interesting going on at first glance.  Notice tho she looks pretty darn good (glowing), is on the cool side (water dish off to the right) and she has been off feed.  Also she of course has been breeding well and paired a few times with a couple of different males.  All the signs that she might be heading towards producing some eggs for me this season! 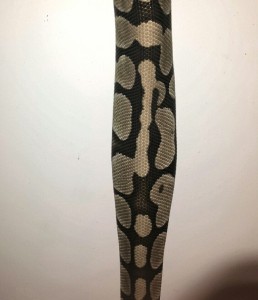 Now a look at the same exact female moments later draped vertically (hanging from my hand).  A few gentle strokes to get her body relaxed and dangling shows a slight “bulge” forming in the lower portion of her body.  The start of a build!

Generically from here, depending on her last pairing, I would pair her one more time to make sure and then label her done on her breeding record.  From there watching as the build continues to grow and keeping an eye out for an ovulation.

In a nutshell that’s all I’m watching for in my girls.  No palpating, very little ultrasounding, just looking for the “signs” that a female is getting ready to go and “checking” them for builds by draping them in the air to see if there is a bulge.  Builds can last weeks so they are fairly easy to catch compared to ovulations.  So with that in mind it gives me a point of reference for when I really need to pay close attention to a female’s next shed and note when she would lay after.  If you see a build, but never an ovulation, you may have just missed the OV and it’s a good idea to note the next shed date anyway and see if eggs show up about 4 weeks later 😉

Hope this helps. 🙂  As always your mileage may vary.  I tend to check my females during breeding season almost daily to see what they are doing relative to the list I made and in the past several years have yet to be surprised by a clutch of eggs.  Surprised by an ovulation?  of course!  But it definitely has helped me stay on top of when I need to start checking a female’s cage for eggs 🙂

Best of luck this season and every one after! 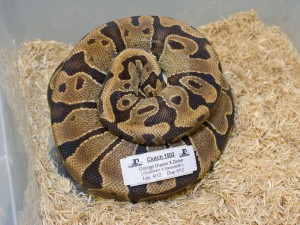 Granted it’s not an Axanthic clutch 😉  But it’s still exciting to see the results of a long winter of breeding.  Also I’m VERY optimistic about this season compared to last season.  This girl laid 6 plump white eggs which is a huge improvement over last year’s slug-o-ramma!

So needless to say I’m looking forward to what hatches this summer!  If you are looking to see what all may be hatching and get on my waiting list feel free to head over to my Waiting List page!